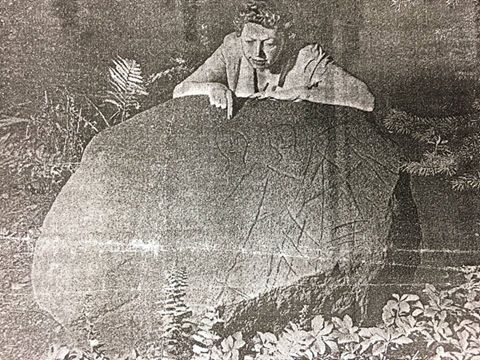 In the 1950s, West Boylston resident Ruth Edwards made a surprising discovery: a large stone in her front yard bore a hand-carved drawing of two figures among strange, rune-like lines (pictured below). She called in experts to examine this seemingly inane carving, and they dated it to between 3,000 and 5,000 years old. In an interview with the Worcester Telegram, Edwards referred to the stone as the “mystery rock” because, as she claimed, the drawing of two figures served no purpose to ancient people and likely took ages to carve.

Theories began to pop up about the mysterious stone. As is the case with other old carvings, some people believed Vikings ventured as far south as New England and left their mark on stones. Edwards, in her interview with the Worcester Telegram, said that she thought the carvings looked a bit like Norse runes. But this would date the carving to under 1,000 years old, as the earliest definitive evidence of Scandinavian presence in North America starts in the 10th century. Others claimed that ancient Mediterranean empires—the Romans or Egyptians, perhaps—sailed to the Americas thousands of years ago and left their mark. There is no way to prove or disprove if ancient Mediterranean peoples did come to North America thousands of years ago, but it seems unlikely they would have come so far inland and carved such a meaningless “message” into a rock.

Surprisingly, not many theories cropped up involving Native Americans carving the rock, even though they are the only group of ancient people on Earth confirmed to have actually, definitely been in North America in that vague “3,000 to 5,000 years ago” period. The carving on the rock could have been a marker for ancient Native Americans or else a “doodle” left by a bored stone worker. If the carving really is that old, this seems like the most plausible theory.

The true story of the West Boylston Mystery Rock remains a mystery. Was it a sign left by an Ancient Egyptian explorer who went a bit too far west? What about the Vikings!? Or…is it a complete fake and the dating of “3,000 to 5,000 years old” is wildly inaccurate? It’s unlikely we’ll know the truth—but isn’t that part of the fun?