West Boylston is a small town with a lot of history. From Colonial times to the Industrial Revolution to today, the town has seen numerous changes. A little-known West Boylston story is of the Murdock Globe, or the Murdock Orrery Planetarium. 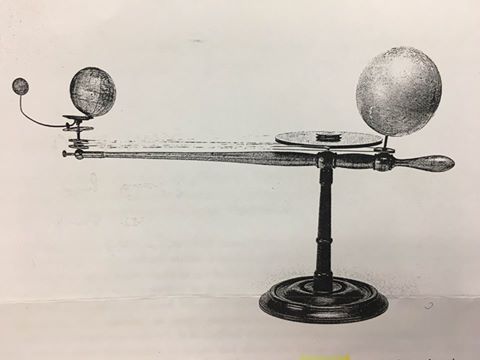 David C. Murdock (1815-1886), a West Boylston native, was an influential town figure at his time. He owned a local shop, served on the school board, and moderated various town meetings. But he contributed to the whole world in addition to West Boylston. He studied cartography, or map making, and created several globes to disperse nationwide for use in schools. These globes were well-crafted and highly detailed. Murdock also created an orrery planetarium to display his globe as part of the solar system; an orrery planetarium is a small, table-top model of the Sun, Earth, and Moon (see picture below). It is crafted with a combination of rotating sockets and metal arms which allow the models to rotate and allow the Moon to revolve around Earth, and Earth around the Sun. It is an excellent tool to educate students about Earth’s journey around the Sun or to model astronomical phenomena like eclipses. Murdock did not invent this device, and they have existed since the 17th century, but he was one of the first American cartographers to mass-produce these globes and planetariums for use in schools and universities.

There are few surviving Murdock Globes in existence today; one is housed at the Smithsonian National Museum of American History. According to its description, the surface of the globe is covered in thin paper, which is in poor condition after almost two centuries. It’s exciting to think about the people in West Boylston’s history and the great things they contributed to the world.