World War I is perhaps best known for its trench warfare. Soldiers were stuffed into often muddy, cramped dugouts. In July 1918, one West Boylston resident, Emily Richardson, received a letter from her brother, Herbert, serving with the Canadians in France. His testimony is as follows:

“I am writing this letter in a hole, dug into the ground, with a sheet of iron placed over the top. It is not a bad place in the summer time, for we have a lot of dried grass in the bottom, to sleep on, and a place in the corner to make a fire, so that we can make cocoa or tea, that is, if we can beg or borrow any. The lender, however, is generally out of luck about getting it back. This den of ours is certainly a comical looking place. It is about five feet long and three feet wide, and serves as a billet for two. We get into it from a hole dug in the side. I expect to go on fatigue duty tonight.”

Herbert’s accommodations are by no means glamorous, but he at least seems to have a sense of humor about it. Below is an image of the newspaper article where Herbert’s letter was publicly displayed. From July 1, 1918. 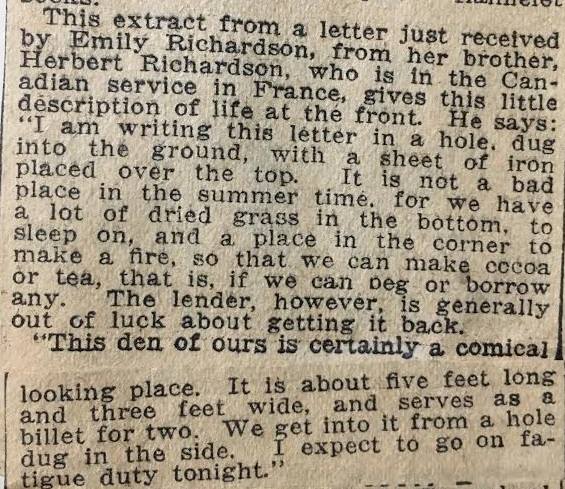