Sometimes the best stories sound made up. Like the story we’re about to tell you—a story which involves one of the most well-known nursery rhymes, billionaire automobile tycoon Henry Ford, and the world’s most expensive bell.

If you’ve ever driven through Sterling center, you may have seen the statue of a small lamb on the town common. The statue is in honor of Sarah Josepha Hale, a resident of Sterling, who wrote the nursery rhyme “Mary Had a Little Lamb” about a local student named Mary Sawyer who was followed to school one morning by her pet lamb. The schoolhouse where Mary went was eventually bought by none other than car manufacturer Henry Ford (THE Henry Ford) and relocated to Sudbury.

The school’s original bell, however, was sold at auction some years before to Oakdale resident Mrs. Lensey Ballou. After Henry Ford moved the schoolhouse, Mrs. Ballou reached out to him to tell him she had the bell which called students like Mary Sawyer each morning. He enthusiastically agreed to buy it. Mrs. Ballou sold it to one of Mr. Ford’s “agents” for an undisclosed amount.

So, the next time you sing “Mary Had a Little Lamb,” remember its origins in our neighbor Sterling and how West Boylston became wrapped up in the origins of the famous nursery rhyme. Check out the full story below. 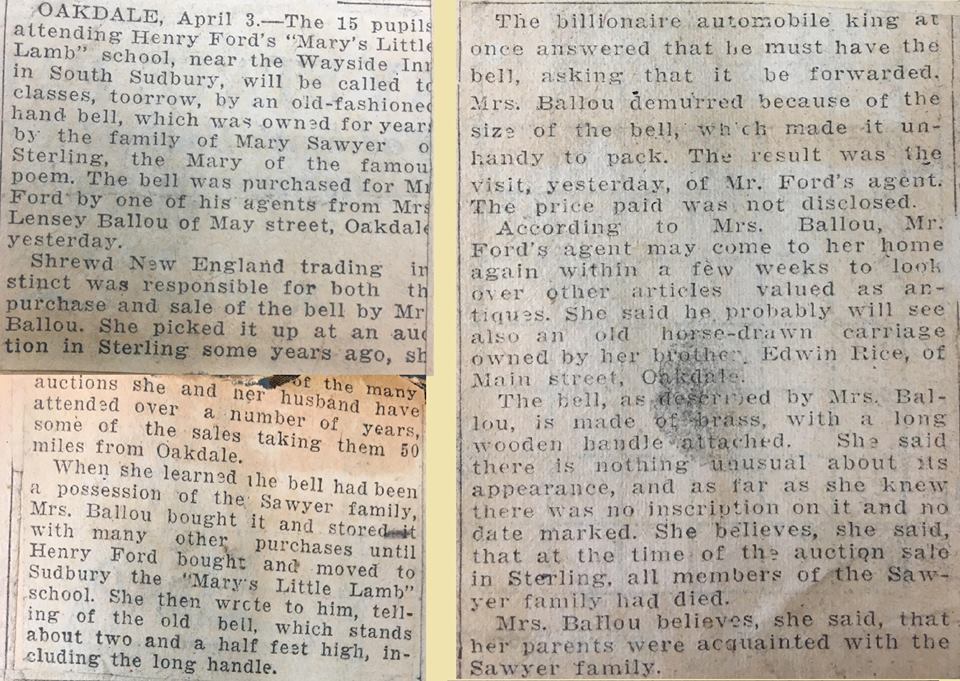