If you’ve seen the musical Hamilton (or have listened to the soundtrack on unending repeat and have only dreamed of seeing it live), you probably know a little about the early conflict between the Federalists and the Anti-Federalists. Put simply, the Federalists supported a strong central government and nationalized banks, services, etc., while their opponents supported giving most governmental power to the states. This was the start of America’s political parties. The feud was contested and biases bled into newspapers…such as the Massachusetts Spy/Worcester Gazette. In the clipping below, we see an Independence Day article from July 4, 1810 that is more than it seems.

The article wishes readers well on Independence Day but is laced with not-so-subtle support for the Federalist cause: the piece’s writer refers to the city of Boston as “the headquarters of good principles.” During the first decade of the 1800s, Federalists, led by orator and Representative Fisher Ames, became the dominating political force in the Massachusetts House of Representatives, and Ames had strong influence nationwide. Other subtle jabs at anti-Federalists appear throughout this paragraph, most significantly at the end of the paragraph when the writer wishes “every true friend of America” a better 4th of July in 1811. This implies that Federalists are the true friends of America and their opponents are not. This simple write-up celebrating July 4th is, in reality, a short editorial. Despite the frequent warnings from President George Washington, political parties had sunk their claws into American government. 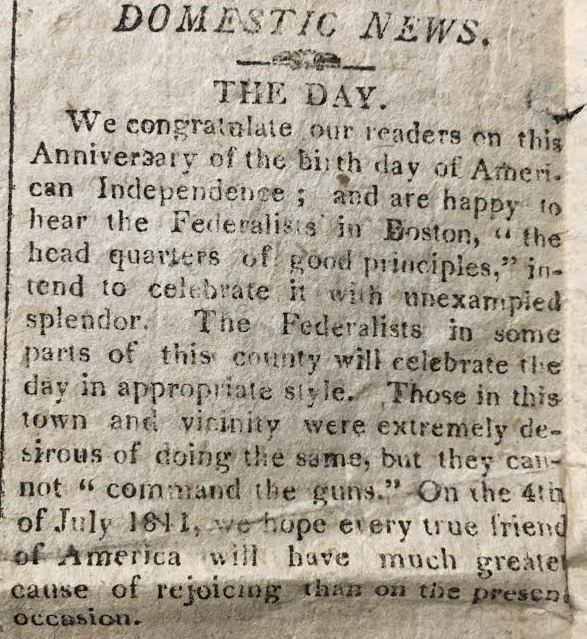