The Old Farmer’s Almanac is the oldest consistently published periodical in the United States, first published in 1792 by Robert Bailey Thomas. Published annually, the Almanac provides meteorological, astronomical, and botanical information—as well as a slew of recipes, anecdotes, and related articles—of that current year. But what makes The Old Farmer’s Almanac so important to the Beaman Memorial Library and to West Boylston? Because the Almanac’s founder was another of West Boylston’s local celebrities.

Robert Bailey Thomas lived in West Boylston for most of his life. Born in Grafton, he moved to West Boylston in the late 1700s and studied agriculture, astronomy, and weather. In 1792, he published the first volume of the Almanac, and it was an instant success. He sold thousands of copies within the first few years, and the sales tripled as the decades rolled on. He originally called the publication The Farmer’s Almanac and added the “old” to the name in the 1830s when his almanac outstripped the success, accuracy, and vitality of similar periodicals. Today, the Beaman Memorial Library boasts one of the only complete collections of the Almanac in the United States; the only other institutions which hold this honor are the Library of Congress and the Almanac headquarters. 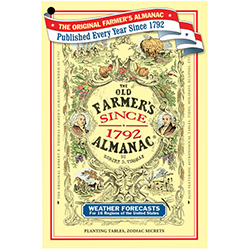